The September 100 Club Prize Draw was carried out by our Captain, Len Goodman, on Captain’s Day at the Wildernesse.  The winners are as follows:

Captain’s Day at the Wildernesse

Captain’s Day was played on Tuesday 1st September at our Captain Len Goodman’s home course, The Wildernesse.  The course was in sensational condition and the golf club treated us like kings for the day!

Len hit a fabulous ‘DRIVE IN’ from behind the Clubhouse and this can be viewed by clicking on this link –   https://youtu.be/FY8nxwvO1Zk

We had some terrific scores and enjoyed an excellent lunch accompanied by some mystifying magic from David Redfearn.  John Conteh did a sterling job conducting the auction which raised plenty of money and helped us raise just over the £20,000 mark for the day.

The Charles Drake Trophy was won by Gavin Wilding (pictured with Sponsor, Richard Keel and Captain Len) with the lowest gross score of 77, Michael Walsh won the Division 1 Trophy with 38 points and the winning team on the day were Martin Rose, Greg Perkins, Andrew Jaye and Michael Durst.

Huge thanks must go to our Captain’s Day sponsor – Richard Keel and, of course, our Host and Captain Len Goodman who each both presented and sponsored a Sunshine Coach to ‘Grange Park School’ in Sevenoaks and ‘The Young Lewisham Project’. Thank you so much, Richard & Len. 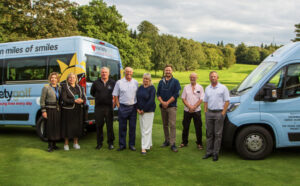 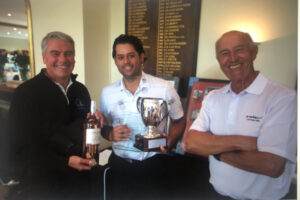 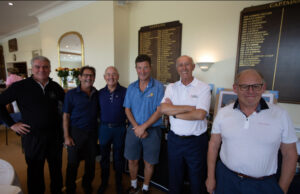 This popular event was played at the stunning Hankley Common GC last week and the weather and condition of the golf course was absolutely superb!

The scoring wasn’t too bad either and the winning Pair with 46 points was former footballing legend Paul Walsh and Steve Middleton who has recently joined Variety Golf, so a great way to start, well done Steve & Paul! (Pictured here receiving their prizes from Captain, Len Goodman)

Runners up were John Griffin & Mark Lahiff with 43 points, 3rd place went to Paul Jones & Andrew Charlesworth on 42 points and in 4thplace on countback was Mark Tomkinson & Thomas Hutchinson.

Due to current COVID regulations, there are three of our chosen venues which, unfortunately, can no longer allow us to host our Golf Days this year – Woking (6th October), The Berkshire (14thOctober), and The London Club (28th October).

Therefore, you will see in the revised schedule below that the Chairman’s Trophy will now be played at Worplesdon on the 1st October, the ‘Strictly Come Golfing’ event on the 14th October at Knole Park – and we will be finishing off the 2020 season with the Sir Bruce Forsyth Classic at the magnificent Sunningdale Old Course on Thursday 29th October! (Please note that this will be a members’ only event due to the restricted field size of 60)

So, we are only losing one scheduled event, namely, the Grand Final which was originally due to be played at The London Club on the 28th October.  However, as we have only 5-6 individual counting events, we have decided to not run the Order of Merit this year but will, of course, resume in 2021 when hopefully we can run a full schedule.

Please note that all of the remaining events will be able to run with a full field apart from the Chairman’s Trophy at Worplesdon and the Sir Bruce Forsyth Classic at Sunningdale.  Both these events will be a reduced to a field of 60, so they will both fill up very quickly.  Please make sure you enter ASAP!  All the details for the upcoming events will be on the Events Page.

Lastly, you will see that after much discussion with the Royal Lancaster, we have decided to go ahead and book Sunday, December 6th for our Annual Charity Dinner.  Whilst it is impossible to predict what the guidelines will be so far ahead, nonetheless, the hotel is confident they can accommodate us successfully and so we have decided to go ahead.  You’ll find full details on the accompanying flyer.  In this instance, please pay by cheque or bank transfer to: a/c no: 96808640, s/c: 60-18-20.  In the event of cancellation payments will be fully re-imbursed.

Revised Schedule of Events for 2020

Please note the September Prize Draw will be drawn out at the Captain’s Day Prize-Giving at The Wildernesse on the 1st September by our Captain, Len Goodman. The September prizes are below:

2nd PRIZE  Golf for two to take on the old pros – Samantha & Jamie at Moor Park!

3rd PRIZE  A pair of Skechers golf shoes of your choice

“The Old Course at Sunningdale GC has long been my Number 1 and most favourite golf course of all time!”

Every time I arrive at Sunningdale, I always get goose bumps which I must admit doesn’t happen very often to me these days after a lifetime of playing some amazing courses all around the world whilst playing on the European & Challenge Tours. So, I am excited that we will be ending our season at Sunningdale and wanted to share some of its history as one of the most popular courses in the world. 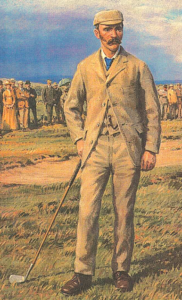 Sunningdale’s Old Course was designed by two-time Open Champion Willie Park Jnr and was opened in 1901. The land on which it was constructed belonged to St. John’s College, Cambridge and mainly consisted of heather, gorse and pine trees.

Bobby Jones had a great fondness for the Old Course and in 1926, during qualifying for The Open Championship (which he went on to win the following week at Royal Lytham), Jones shot a remarkable 66 & 68 and after his round said: “I wish I could take this course home with me back to The States”.

The Old Course is today considered one of the greatest golf courses in the world and is regularly found in the top 30 of the world’s rankings. It will be a very special way for Variety Golf to finish off the 2020 season and celebrate the memory of one of our most celebrated Captains at our Sir Bruce Forsyth Classic on Thursday 29th October.

Take a look at: www.sunningdale-golfclub.co.uk.

If you would like to enter any events for the rest of the year, please feel free to get in touch ASAP to avoid missing out.  I look forward to seeing you at an event soon.

It was sunshine all the way when Hall of Famer, Dame Laura Davies, and Ryder Cup hero, Philip Price, battled it out alongside Variety Golf members and guests at the inaugural Variety Mixed Challenge Cup at the Grove on Saturday, August 8th.

Captaining their respective teams from the Ladies European Tour and the Men’s Senior Tour, Dame Laura and Philip were supported by a further sixteen professionals each playing with three amateurs, making up nine fourball teams on each side. There were prizes for the leading professionals as well as the winning teams, with two players’ scores counting towards the team score.

The winning pro was Gary Wolstenholme with a score of 3-under par, closely followed by Steven Richardson (2-under) and Annabel Dimmock (1-under).

The winning team with a total of 88pts was professional Chloe Williams playing with members Raj Sandhu, Bobby & Avi Chhatwal.

In his acceptance speech, Seniors Tour Captain Philip Price congratulated The Grove on the exceptional condition of the course and greens as well as the organisation of the day – hoping that it might become an annual event. He went on to say, “it was not only a pleasure to play in such beautiful surroundings, but also to know that the monies raised would be used to contribute to the lives of disadvantaged children”.

Concluding the day, Director of Golf, Jamie Little, thanked all the participating professionals and announced that over £20,000 had been raised during the day – including a highly successful raffle and auction – enough to put yet another Sunshine Coach on the road. 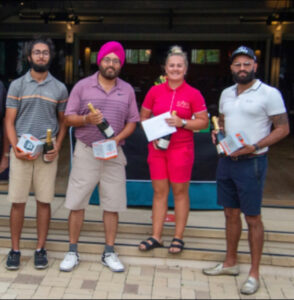 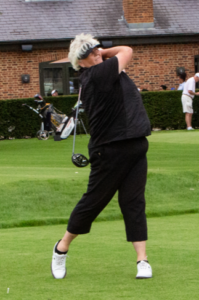 Dame Laura gets us underway 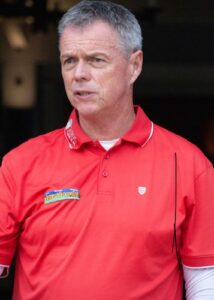 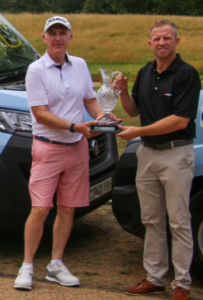 The Winners of the August Prize Draw – The Hundred Club

Thanks to all the members who have supported our Variety Golf – Monthly Prize Draw. PLEASE WATCH THE VIDEO BELOW to see the August draw and prize winners:

Our next event is our Ladies & Seniors Tour Pro-Am at The Grove on Saturday 8th August followed by the Variety Pairs Event at Hankley Common on the 26th August. Both are shortly followed by Captain’s Day at The Wildernesse where we will get the chance to finally watch and applaud Captain Len Goodman’s ‘Drive In’!

With only a handful of spaces left for each of these events please get in touch to enter ASAP before its too late!

A Note from Chairman, Pip

For reasons we all know only too well, it’s been a difficult six months – not least, because it is still impossible to predict how things are going to pan out for the second half of the year, let alone into 2021.

I believe that by any standards our society has performed remarkably well.  Although Brocket Hall was our first golfing event, we have achieved a great deal during the period when golf clubs were closed.  We have launched our new website which, amongst other features, at last provides a simple and streamlined way for us to book and pay for events; we have started our popular 100 Club Monthly Draw (which alone will raise enough by the end of the year to pay for a Sunshine Coach) and brought in well in excess of £100,000 through the generosity of our members who responded so magnificently to my letter in March when the full significance of the effect of Covid 19 and its likely effect on our finances first came to light.

So, to all of you, a huge ‘thank you’. But I would also take this opportunity to express our appreciation to Jamie.  He has worked incredibly hard, virtually single-handedly, through this difficult time to come up with innovative and imaginative ideas for new events, as well as organising them brilliantly and offering us even more in terms of value for money than we have ever enjoyed before – not to mention repeatedly re-arranging our schedule for the rest of the year. As our Director of Golf he is totally committed and, in my experience, quite exceptional.

So far, so good – but, as for the rest of the year, we will have to wait to see.  However, one thing now seems pretty certain – we will not be able to hold our Annual Dinner in December, at least not in any recognisable shape or form.  Whatever the eventual outcome (and we can’t quite bring ourselves to cancel it yet!), as by far our most profitable event, it will leave a huge hole in our fundraising.  Our ambition is to present a Sunshine Coach every month for the rest of the year.  To do that we will need all the support we can get.

So, again, thank you for your loyalty and help to date.  As you will see below, we have a lot of golf coming up and I hope you are looking forward to it as much as I am.