Len was born in Bethnal Green, London, and moved to Blackfen when he was six years old.  He later attended Westwood Secondary Modern School, where he was a member of the cricket team.  He started dancing at the age of 19, after a short time as an apprentice welder for Harland and Wolff in Woolwich.  He turned professional, won various competitions, and retired from dancing after winning the British Championships at Blackpool in his late twenties.  He is a recipient of the Carl Alan Award, in recognition of outstanding contributions to dance.

As head judge of 12 years of Strictly Come Dancing, Len decided, in July 2016, that he would be leaving the show. His final appearance was on the Christmas Day Special.  Len has also been the head judge on Strictly Come Dancing’s American adaptation, Dancing with the Stars, appearing in all seasons since 2005.  He left the show after season 20 but returned the following year.  Len has appeared in dozens of TV shows including a BBC1 documentary about the last voyage of the Titanic capitalising on his experience as a welder.  He also voiced the Professor in the five-time Emmy award winning children’s programme Auto-B-Good, and has presented Len Goodman’s Dance Band Days, Len Goodman’s Perfect Christmas, Dancing Cheek to Cheek, as well as questing in the documentary series Secrets from the Clink.

Len hosted two series of BBC1’s Holiday of My Lifetime, fronted Len and Ainsley’s Big Food Adventure, and the game show Partners in Rhyme.  When he appeared on BBC’s Who Do You Think You Are? he discovered that his great-grandfather came from Poland, where he had fought in the anti-tsarist uprising, and was awarded Poland’s highest military decoration for heroism and courage. Afterwards he said “I’m not the person I thought I was”.

He is a keen cricket fan, and West Ham supporter featuring on Football Focus. Len is also a keen golfer, and Variety Golf is delighted to have him as Captain for 2020.  From the outset Len promised to play a prominent part in our schedule of events. For his Captain’s Day at the Wildernesse on 19th March Len had sponsored – and planned to present – a Sunshine Coach on behalf of his Dance Academy. Due to the pandemic the event had to be cancelled, but the coach was still presented later that day directly to the Young Lewisham Project. Thank you, Len, for reminding us what Variety Golf is all about. 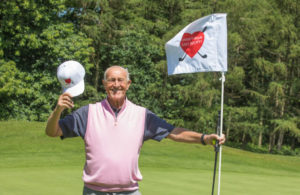